Weed Is a Big Market for Signify LED Grow Lights

The world’s biggest lighting company has been selling equipment to the horticultural industry for decades, building up its business outfitting greenhouses to grow plants like tomatoes, lettuce and roses. Lately, demand for a new crop has exploded onto the scene: Pot.

A cannabis boom that began a few years ago in the lead up to legalization in Canada, Uruguay and some U.S. states is now fueling sales of equipment like so-called grow lights. The changes in legislation and surge in consumption have led farmers to seek out more controlled and energy-efficient cultivation in hothouses.

“Where it’s legal, we participate, Worldwide we see an evolution in the thinking of cannabis production.” –Eric Rondolat, chief executive officer of Signify NV, a spinoff of Amsterdam-based Royal Philips NV.

Rondolat’s willingness to talk about marijuana and Signify is also a sign of change. The manufacturer gets the bulk of its 6.4 billion euros ($7.2 billion) in annual revenue from more mundane products like home lighting fixtures and street lamps. Until a few years ago, selling specialized gear to grow medicinal pot wasn’t something the company sought to publicize.

“We have seen big growth in cannabis being legalized lately and we see that also through our activity,” Rondolat said in an interview.

Signify’s brisker business is backed up by forecasts. The horticulture lighting market is set to expand to $6.2 billion by 2023 from $2.1 billion in 2017, partly driven by the legalization of cannabis for medicinal purposes, according to Markets and Markets, a consulting firm.

“We are just at the beginning of the greenhouse boom in Europe, and still at a fairly early stage in North America,” Alex Brooks, analyst at Canaccord Genuity, said by email.

Benefits to companies like Signify are a sign the cannabis rush is feeding into the manufacturing supply chain, with big firms in the drinks and tobacco markets also raising investment. The Dutch firm is not the only light maker wading in.

German rival Osram Licht AG has stakes in several horticultural specialists. In May, the company bought Austin-based startup Fluence, which like Signify sells more energy-efficient LED lighting for greenhouses. One tout on its website is for The Fireweed Factory in Juneau, Alaska, that gets about 1 million visitors a year and caters to local and tourist demand. Osram generally sells to “growers of pharmaceutically usable plants such as cannabis,” a spokeswoman said in an emailed statement.

Projections for overall growth in the pot industry are eye-catching. Industry consultant Prohibition Partners said more than 50 countries have legalized medicinal cannabis, with some 10 more expected to join the list this year. The U.K. recently received its first bulk batch from the Netherlands after it was legalized for prescription last year. 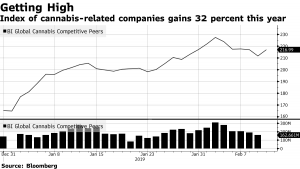 The global legal market will reach $232 billion in 2027 from $9.9 billion in 2017, according to Bryan, Garnier analyst Nikolaas Faes. Growing companies using new greenhouses outfitted with lighting, humidity and temperature controls have an advantage over those relying on retrofitted ones previously used for other crops, he wrote in a report this month.

Signify has a leg up on competitors, Rondolat said, because the company has developed more than 150 types of lighting adapted to individual crops, including tomatoes, cucumbers, tulips and cannabis. Each requires its own light intensity and duration to improve yields, hasten flowering and quicken root growth.

Rondolat has been at the helm of Signify since before shares were listed in 2016. The company has yet to post revenue growth as it navigates the consumer switch from conventional lighting to light-emitting diodes, or LEDs. With Brexit, rising U.S. inventories, trade tariffs and a slowdown in China also biting, growth in its horticultural business is a bright spot.

“This is a substantial market size already, and with a very interesting perspective going forward,” said Rondolat.

For investors, it’s hard to figure out how much of a difference this could make. The company doesn’t break out earnings from greenhouse lighting or from selling specialized equipment for cannabis production. The CEO declined to provide details.