Two years ago, a Canadian young plant propagator took the LED leap and hasn’t looked back. 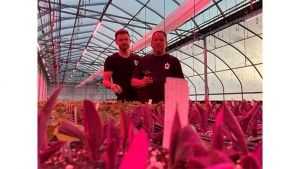 Woodley Farm and Greenhouses (Norfolk County, Ontario, Canada) found itself at a bit of an inflection point.

Rewind to the spring busy season, 2019. Woodley and Co. were amid an expansionary period, and as such “we realized that we were also going to have to expand our propagation area,” recalls Barry Woodley. One of the first aspects of the proposed new propagation range that Woodley, the first-generation proprietor of the operation, started to consider was what type of supplemental lighting to adopt for the space.

“I remember going down every single aisle at the Canadian Greenhouse Conference that year, and every other booth it seemed like there was another lighting manufacturer,” he says.

After continuing his due diligence throughout the year, by June the operation had settled the proven stalwart: Philips.

“It really came down to them being a worldwide, recognized brand, and all of the R&D that they were doing all over the world – specifically in places like Europe and Russia where they have even lower natural light levels than our region,” explains Woodley. “Another big part of it was the [Signify] sales professionals [representing Philips LEDs] that we worked with, Ray Houweling, and our structure specialist Rudy Ouwersloot, from Paul Boers Manufacturers. I trusted them, and I knew they wouldn’t lead me wrong. Also, the support was excellent.”

The first new section of greenhouse they tackled featured 72 Philips LED toplighting fixtures throughout a 5,000 square foot range. Woodley remembers the project as a somewhat easy one, all things considered.

“The biggest problem we were trying to solve [by adding LEDs] was figuring out a way to get more crop cycles through our propagation area, but without sacrificing plant quality because we are always focused on getting the best, healthiest plant we can,” he says.

Once the new LED grow lights were in place, pansy plug rooting times, for example, were reduced by an average of seven to 12 days, and the new lights used less energy versus the HPS technology Woodley had previously relied upon.

“We’re also seeing faster rooting times in our liners, better quality rooting,  improved top growth, and less stretching because the plants are getting the daily light integrals (DLIs) that they need, even in the winter in Canada,” he adds.

Quite honestly, Woodley expected all of those benefits when he signed on the dotted line. One ancillary benefit he did not anticipate was a boost to overall plant health with the LEDs.

“Now, we get very little plant stress, and we don’t have any more disease problems,” he explains. “Probably the biggest benefits for plug and liner growers, in my opinion, are quicker and more predictable rooting times. We are no longer stuck relying on sunny days here in Ontario during January and February; relying on winter sunlight is just too risky, and now we can be much more precise.”

That newfound level of precision that Woodley references is especially apparent in the operation’s plant scheduling. When a grower can root plugs in a mere five to seven days’ time, repeatedly, it demonstrates the added value that piqued Woodley’s interest in LEDs.