But those benefits are also accompanied by their ultimate offering: the ability to heat growing media directly, rather than warming the entire greenhouse.

“Root zone heating systems deliver the heat very close to the crop. The advantages are that the crop keeps ‘warm feet’ and that the heat is less likely to be wasted when it delivers energy to other parts of the growing structure,” says A.J. Both, professor and extension specialist at Rutgers University. “Another advantage can be that because the heat is delivered so close to the crop, the overall greenhouse temperature can be maintained at a lower set point, reducing the overall heating costs.” 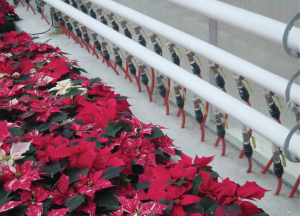 Since 2000, Both has served as extension specialist with expertise in controlled environment engineering. He has also conducted studies on greenhouses, growth chambers and high tunnels, with an emphasis on supplemental lighting, hydroponic crop production and the use of energy in agricultural systems. When he is not doing research, he teaches undergraduate and graduate classes ranging from plant biology to environmental sciences and environmental engineering.

But while root zone heating offers growers a host of advantages, Both notes that one disadvantage is their inability to operate at high water temperatures without potentially damaging the crop.

To maintain the set point temperature, Both says greenhouses that are located in colder climates often use additional heating provided by perimeter and overhead heating pipes, for example. When considering the yearly heating requirement, it is not uncommon that a root zone heating system covers 30% to 40% of the annual heating demand, he says.

When searching for a heating system, Both says that the installation and operating costs should be the first considerations, along with other things.

“As part of that decision, the type of fuel source should [also] be considered. Retrofitting or upgrading a heating system creates its own challenges since certain options may not be feasible or cost prohibitive,” he says.

When contemplating a heating system, Both says the level of control needed is contingent on the value of crop, the quality the crop needs to have at harvest, the amount of time the crop is grown and the grower’s level of expertise. While most heating and cooling systems are controlled with an automated or computer system, Both says that the control algorithm, also known as the operating strategy, can be very simple — turning things on and off at set times — to highly complex — incorporating weather forecasts and/or tracking energy prices — which are important, depending on what the grower needs.

“For many growers, good controls are essential, but they are part of a number of things that need to be done well in order to have a successful production system,” he says.

However, it’s important to remember that there are two ways to heat a greenhouse — by blowing hot air around or distributing hot water.

“Hot air systems are typically easier and cheaper to install and operate, but have more difficulty distributing the heat uniformly,” Both says. “Designers can overcome this with some tricks, including horizontal airflow fans and/or polyethylene distribution tubes. Hot water systems require an extensive plumbing system with valves and pumps but can distribute heat uniformly. The ‘Cadillac’ of the hot water heating systems is the root zone heating system. It is the most expensive but delivers the heat right where it’s needed and very uniformly.” 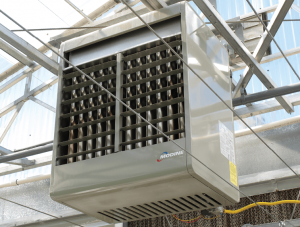 How do root zone heating systems help growers save money? According to Both, since greenhouses are designed for maximum light transmission, they are typically poorly insulated.

“As a result, most greenhouses are expensive to heat. The larger the surfaces area exposed to the outside environment, the more heat they lose. Large temperature differences between the inside set-point temperature and the outside environment also result in larger heat losses,” Both says. “Adding an extra layer of glazing material (double poly or glass) helps, but also reduces light transmission.”

One of the most effective ways of reducing greenhouse heat loss, according to Both, is by installing energy curtains. During the winter months, these curtains can be closed at the end of the day and opened around sunrise, and therefore, can cut energy losses “substantially,” by about 30% to 40%, he says.

When considering heating systems, however, Both says root growth and yield improvement will depend on the variety and age of the crops greenhouses are growing.

“Not all crops have the same temperature optimum, and the temperature requirements may change depending on the age of the crop,” he says. “Some of this information comes from experience, some can be learned from research, and root zone temperature is but one of a number of factors that determine the overall plant response. Most plants are able to adapt to a range of growing conditions, but greenhouse growers are usually keen on providing the optimum conditions so that the plants can be finished as quickly as possible. That’s why commercial crop production is not as easy as it looks — even in the more controlled environment of a greenhouse.”

Overall, Both says the biggest benefit of using root zone heating systems is the high uniformity of heat distribution. He strongly advises growers to speak with professionals when considering one for their own operation.

“Unless [they] have extensive experience with designing heating systems, growers are encouraged to enlist the help of qualified designers when deciding which system is the best option for their operation,” he says.