A stronger plant, higher fruit weight and more uniformity in growth; these are the results of illuminated tomato cultivation when combining Philips GreenPower LED toplighting compact and SON-T lighting. Thus a hybrid light solution. Both projects were installed at the end of 2019. The growers, the world renowned tomato cultivators Bryte from the Netherlands and Den Berk Délice from Belgium share their experiences with hybrid lighting during the first cultivation season in this article.

“The big advantage of LED lighting is that there is much less radiant heat from the light, which gives us more control over the climate in the greenhouse. Since light and temperature can be controlled more independently from each other with hybrid lighting, we have to change the way we approach the climate differently and that requires a new way of thinking, where the experience of the Signify plant specialists comes in handy,” says Zwinkels.

Heat Differences in the Greenhouse 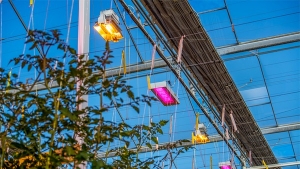 Where heat is mostly the deciding factor with traditional SON-T illumination – but also plays a major role as an unavoidable by-product for cultivation control – this is no longer the case with hybrid illumination. LED leads to much less excess heat in the greenhouse, which makes it possible to control light and temperature individually. It is thus easier to control the growing conditions.

For example, Den Berk Délice chooses to grow generatively up to 28°C in winter and from March more vegetatively to keep a strong crop. Lucas: “We noticed that we are much more in control with LED.” The cultivation experts at both companies carefully thought how they could anticipate on the changing temperature situation in the greenhouse. Erik: “With us, the position of the growth tube could be at the expense of the fruit weight. In our case, the best solution was to introduce extra heat from the bottom of the greenhouse. We also noticed that control errors were less likely to be made due to better control over the climate, and that the climate became more constant. We saw positive crop development and were satisfied with the fruit weight and the crop growth.”

“A big advantage of hybrid cultivation in comparison with SON-T is the longer illumination period”, said Koen.

“Especially in the winter months, a high crop yield is important to us; it is a period that we want to make the most of. We have seen that with hybrid cultivation you can illuminate earlier in the fall, but also until deeper in the spring, up to thirteen or fourteen hours a day. Of course you have to keep looking at what extra lighting yields in terms of production and costs.” 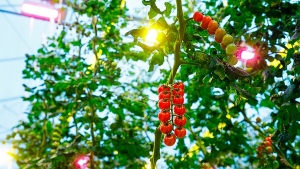 The plant experts of Signify are experts in using LED and know what LED lighting means for crop growing and climate. In the past growing season, they assisted the companies with light and climate advice. Both companies now have 180 µmol/s/m2 light, distributed across 90 µmol/s/m2 LED toplighting compact and 90 µmol/s/m2 SON-T-lighting. The Philips GreenPower LED toplighting compact was introduced to the market during the last growing season.

“Signify uses clear language”, said Erik. “They are the right discussion partner for me, who regularly visits and discusses what we encounter in practice.”

Koen adds: “The specialists also have a large network. Via them, I managed to get into contact with other growers who also use LED. I look forward to the annual Tomato Community Event organized by Signify, where cultivators from around the world get together. This not only gives me the opportunity to share experiences with LED lighting, but also to expand my network that I can take advantage of in the future. We always see talking to like-minded people as very valuable.”

Does LED Top-lighting Have a Future? 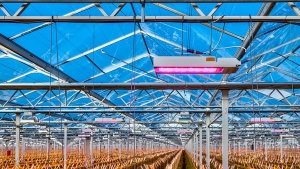 Firstly, LED saves up to 60% on energy costs, but there is more. Erik: “As cultivator, I would like to bring the winter to the summer. LED lighting makes it possible to go to higher light levels and is the right way to do that. I prefer a hybrid solution, thus with SON-T, and then looking at how we can regulate the heat in the greenhouse.” For Koen, the ideal cleaning conditions, where the modules do not have to be shielded, and the simple scaling options are reasons to choose a combination of SON-T with LED toplighting compact luminaires. He refers to the plug-and-play ease of installation of the Philips GreenPower LED toplighting. Both of them consider future investments in a larger portion of LED in their greenhouses. They look forward to the development of LED in combination with higher light levels.

Create the Correct Balance to Control your Crops

Erik wondered if he, at his company, as he said, maybe loved the plants too much. In passing, he refers to the learning curve that you as a grower with LED go through.

“You control it differently with hybrid lighting and that requires experience that you will gain through the years. You become wiser. Light and heat become more tangible and you are better able to control the right balance in your crop. I see it as an added value in which we can develop ourselves year after year, with better end results. Let the summer come during the winter!”