As LED grow lights become more affordable and efficient, more growers are taking advantage of the benefits they can provide, especially for propagation. 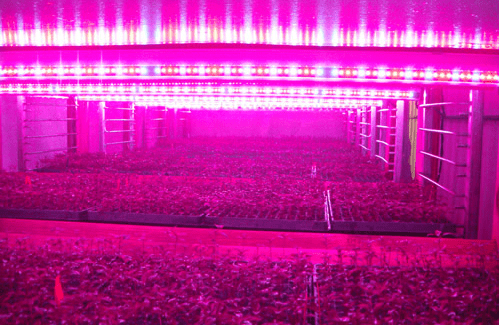 The benefits of using supplemental light for the propagation and production of greenhouse ornamental, vegetable and cannabis crops have been well documented by university researchers and commercial growers. Much of the research with ornamental crops has been done with annual plants, rather than with woody ornamentals.

Michigan State University horticulture professor Erik Runkle, along with his colleague Roberto Lopez, have done a considerable amount of supplemental light research with a variety of annual bedding plants, including petunia, calibrachoa and impatiens.

“There is a laundry list of things growers need to look at when considering installing supplemental lighting,” Runkle says. “From a plant perspective, what is the light intensity that should be delivered? What sort of spectrum should be used? Other considerations include the efficacy or energy efficiency of the light fixtures and the cost.”

Runkle says another consideration when choosing LED lights is the people who will be working around the lights. 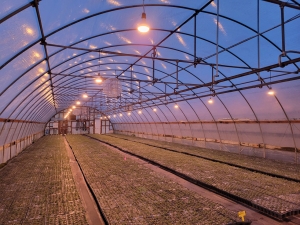 When using supplemental light in a greenhouse, Runkle says the intensity will depend on the crops being grown and the amount of light coming from the sun.

“A target for a lot of crops will be to deliver at least 8 to 10 moles of light per day,” he says. “If a crop is only receiving 4 moles per day on average during the winter that will mean having to deliver an additional 4 moles by supplemental lighting.

“Economically, most supplemental lighting is used in propagation because growers can space a lot of plants at a high density,” he adds. “Once the plants are spaced out, lighting cost on a per-crop basis begins to increase.”

Runkle advises growers that while adding supplemental light can be beneficial, too much light can also have an impact on plants.

“One of the consequences we have observed within the last two years of growers installing LED lighting is delivering too much light to the plants,” he says.

The seedlings of most crops can tolerate whatever amount of light they might receive from a supplemental light source. If plants are given 80 to 100 micromoles from supplemental lighting that is normally fine for seedlings. However, if unrooted cuttings are placed under LEDs at a fairly high intensity, there can be some bleaching or discoloration of the leaves.

“During the first seven to 10 days of propagation too much
light can be too much of a good thing,” Runkle says. “Once plants have developed
the initial roots, more light can be used to promote faster rooting.”

THE BENEFITS OF SUPPLEMENTAL LIGHTING 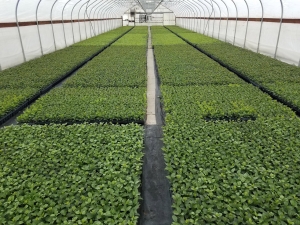 A higher light intensity provided by supplemental lighting can decrease the propagation time, which can also decrease the final crop production time.

“The propagators are selling a more mature plant,” he says. “Growers who transplant the lighted plugs or liners may also see a benefit after transplant.

“The major benefit is shortening the propagation time. A carryover effect in finishing can be a few days to as much as a week shorter if plugs or liners have been lighted. One might expect there would be more of a response for high light crops like petunias than there would be for shade- tolerant crops like impatiens.”

Bailey Nurseries has been using LEDs for the propagation of woody ornamentals since 2011.

“We began using LED lights at our Minnesota facility experimenting with tissue culture acclimatization,” says Jeff Stoven, propagation manager. “We purchased Carlton Plants in Dayton, Oregon, in 2018, and that added a tissue culture lab. With this acquisition, our tissue culture production moved out to Oregon.”

“These pods are converted 40-foot shipping cargo containers,” Stoven says. “The containers are framed on the outside and insulated. On the inside, the containers have been equipped with custom shelving and propagation trays that hold 1,020 flats and are outfitted with LED lights.

“We have been able to increase the yields of the rooted cuttings,” Stoven says. “The yields have gone up substantially because the climate variables
have been eliminated with the pods.

“We haven’t really saved a lot of production time, but we have been able to reduce the production touches. We are taking out the guesswork from growers who would have to make constant environmental changes in a traditional production greenhouse. Our growers are still making adjustments, but they are taking out some of those variables that can be disruptive to their day.”

In addition to the LEDs in the propagation pods, Bailey has also installed
LED photoperiod lights in the greenhouse to extend the day length.

“Our tissue culture lab was always ready to send liners in January and February,” Stoven says. “Initially we were finding some of the plants like maples would go dormant after coming out of the tissue culture lab. Moving plants from the lab, where they were receiving 16 hour days and 70o F, to a dark greenhouse in January and February put stress on the plants. The leaves on the maple tree liners, which were a few inches tall, would turn red and lose their leaves. Our field worker team wanted finished plants that were 12 to 14 inches tall, well-branched and well- rooted, and without providing supplemental light they were receiving a 3-inch dormant stick with roots.

“We found the greenhouse temperature and humidity were fine; it was the light level that was lacking. Adding the LEDs has proven to be the missing link with extending the season. By using the photoperiod lights to extend the day length we have been able to keep the plants actively growing.”

Stoven says he is continuing to look for ways to extend the production season to spread it out over a longer period.

“We continue to trial to figure out what are the best LEDs for the goals we have in mind,” he says. “We are trying to spread out the peak demand so the labor isn’t concentrated in such a small time frame. Propagation is so intensive. Everything is ready to be propagated in May and June and there are not enough hours in a day or days in the week to make it all happen.

“We have been able to roll back some of that production into January and February, where it flattens out that labor curve. I knew there was an opportunity there and it was just a matter of figuring it out.”