For the floating farm, 35 Meuse Rhine Issel cows (breed native to the Netherlands) were placed on a two-story floating platform.

MIAMI BEACH, FLORIDA – Rotterdam, in the Netherlands, is often cited as one of the world cities best adapted to sea level rise, and they continue to look ahead, introducing creative solutions to mitigate rising sea levels. Last month, the city introduced the world’s first experimental floating dairy farm.

The project is located in the industrial and warehousing area of Rotterdam’s Merwehaven harbor. The floating farm is ‘part of a circular city’ says Peter van Wingerden, Dutch engineer and one of the creators of the project.

Van Wingerden, in an interview to Haikai Magazine, said the idea for the Rotterdam farm came to him in 2012, while he was working in New York City as Hurricane Sandy hit. He noticed that the subsequent floods crippled parts of the city and brought food distribution by truck to a halt and the engineer started to think about growing food on the water.

“I see this as a substantial way to produce food close to consumers,” van Wingerden told the magazine. “It’s not the 100 percent solution, but part of a hybrid model,” he added.

For the floating farm, 35 Meuse Rhine Issel cows (breed native to the Netherlands) were placed on a two-story floating platform.

According to the project, the cows will feed on grain and potato peels, discarded from nearby breweries and grass cut from golf courses. The cows’ milk will be able to be purchased from the farm or the twenty-three retailers set up around the city.

The floating farm is just the latest creative project introduced in this Dutch city to adapt itself to the rising sea levels. 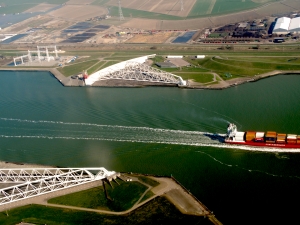 In 2017, the city started to construct public parks that can double as basins for water, creating reservoirs that will keep water from flooding streets and entire neighborhoods. The idea is not to keep water from getting in at all costs but to be able to live and adapt with the rising sea.

“We can’t just keep building higher levees, because we will end up living behind 10-meter walls,” Harold van Waveren, a senior Dutch government adviser, explained to a New York Times reporter at the time.

“We need to give the rivers more places to flow. Protection against climate change is only as strong as the weakest link in the chain, and the chain in our case includes not just the big gates and dams at the sea but a whole philosophy of spatial planning, crisis management, children’s education, online apps and public spaces,” he concluded.

To help direct the water to the basins and control the flow of flooding the Dutch government constructed in 1997 what is seen as one of the best solutions to sea level rise: the Maeslant Barrier.

According to Dutch government officials the Maeslant Barrier serves the complex purpose of keeping an important city safe from the sea, while at the same time keeping the city open to the sea.

With residents demanding other solutions to rising sea levels, Van Wingerden says if this first floating farm is successful, his next projects will be floating platforms with vegetables and another with chickens to produce eggs.