Fighting cannabis pests and pathogens is one of the greatest challenges

One of the greatest challenges that commercial cannabis growers face is the fight against pests and pathogens. Unlike other types of more ‘traditional’ crops, cannabis is highly regulated, thus limiting the solutions to get rid of dangerous pathogens. For instance, the Canadian Pest Management Regulatory Agency and the US Environmental Protection have approved only two chemical crop protection products. At the same time, there is a number of microbial biological agents that have been approved for use on cannabis. Yet, there is still a lack of peer-review literature to make a complete evaluation. That is why Zamir K Punja has authored a paper, published on Pest Management Science, reviewing all the most dangerous cannabis pathogens, and practices to fight them

Depending on the cultivation setting, the pathogens that can affect a cannabis plant vary, with a similarity between greenhouses and indoors. Pathogens can be differentiated according to what part of the plant they infect: root and crown-infecting, foliar and stem-infecting, inflorescence-infecting, and postharvest pathogens.

According to the authors, the most destructive root pathogens are Fusarium and Phytium: if the infection occurs during the early stages of plant growth, there is the risk that these may progress into the flowering stage, causing severe damages to the crop and thus to the whole operation. That is why the authors suggest that an effective way to treat them is through prevention, by applying biological control agents early to allow root colonization and pathogen competition. On the other hand, foliar-infecting pathogens include powdery mildew. Inflorescence-infecting pathogens are the most dangerous for a cannabis growing operation as they actively destroy the bud, posing an even greater risk for the final yield. These include fungi such as Botrytis.

The spread of pathogens 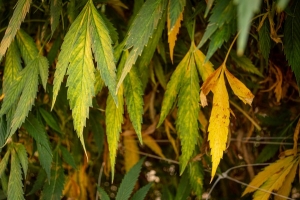 There are many reasons as to why a pathogen makes its way into an indoor facility or a greenhouse. The problem is that once that is introduced into the facility, the spread can happen quite rapidly through carriers (i.e. humans), or even through unfiltered recirculated water and air. Aside from issues with the cultivation practices that might create a favorable environment for pathogens to thrive, starting materials are one of the main causes of a pathogen getting into cultivation. It might happen that stock plants weren’t handled properly, or something happened during the tissue culture process. That is why the authors suggest testing the stock plants before cuttings are taken.

The greatest challenge comes down to dealing with inflorescence-infecting pathogens, considering that their economic repercussions can be extremely dire. As of yet, research is still lacking on how to properly handle such nasty pathogens, especially because in Canada, for instance, research is halted by the fact that only licensed producers are allowed to grow cannabis. That is why the authors suggest some preventative measures that create a non-ideal environment for pathogens. For example, they suggest managing the climate in such a way as to reduce bud rot, by making the climate less humid and thus less favorable for Botrytis. Also, pruning and defoliation might prove themselves to be useful, as they facilitate air circulation.

Another solution that has great potential but requires further study is the application of UV-C light on the plant, which has itself a germicidal activity and also increases the plant’s defensive mechanism. At the same time, it is still unsure whether UV-C might damage tissues that could increase mold levels, or if it has any effect on the cannabinoid levels of the flowers.

To conclude, growers fight hard against pathogens with very limited resources to provide customers and patients the safest and cleanest cannabis. Further research on the different cannabis pathogens and effective methods and solutions to treat them are necessary to advance the industry as a whole.