In the Netherlands, Albers Alligator Special Projects and Centrica Business Solutions have, once again, completed a floating solar farm. The Rob van Vegchel Plant Nursery’s water basin was entirely renovated and widened to accommodate more solar panels. It also got a new liner and slope protection. 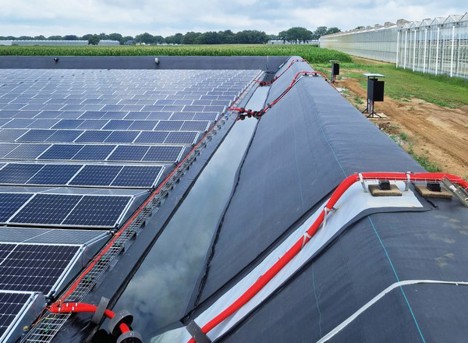 The custom-built floating Multi-F Solar system covers the entire basin. “We could, thus, install 15 to 20% more solar panels than usual,” says Martin Spekle of Albers Alligator. The nursery now boasts 810 solar panels of 455 Wp each, totaling 368.5 kWp. There are three inverters placed along the basin’s long side.

Martin says they often hear that the Multi-F Solar system forms a whole with the basin; it does not stand out.

“The entire anchoring is incorporated in the Multi-F Solar deck, so there are no tension cables or concrete blocks in or next to the basin. That’s not only practical but also more visually appealing,” he concludes.