Hawaii has an unlikely farmer: billionaire Larry Ellison. It was just a few years ago in 2018 that he unveiled his hydroponic farm startup, and now, its produce is being sold across the Islands.

It all started right after the Oracle founder bought 98% of the Hawaiian island of Lanai in 2012. Ellison took his wife to a hotel restaurant and they found the food to be “inedible.”

“We had to drive to the grocery store in town and buy Snickers bars and Coke,” he told Departures magazine. “We decided that is ridiculous — we need to grow our food.”

Ellison floated the notion to his partner, a medical doctor and scientist with expertise in advanced cancer, David Agus. With the belief that food is central to medicine and humanity, the two embarked on a data-driven, technological project that would modernize agriculture. 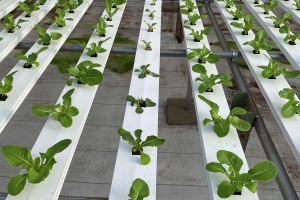 What resulted is a hydroponic farm, where plants are grown in water rather than soil. It’s located minutes from his Four Seasons Resort luxury retreat, Sensei Lanai, which has wellness programs also guided by technology and science. There are now six hydroponic greenhouses on the island, with a mission to grow fresh food for the people of Hawaii — and Sensei Lanai’s well-heeled visitors.

Sensei Farms produce is already used by hotels and restaurants, such as Nobu Lanai, and can be found at local retailers. In 2020, Sensei Farms produce joined the shelves of 32 Foodland Super Market locations statewide, and Sensei Ag’s goal is to expand and do the same in other parts of the world.

“At Sensei Farms, our team grows food to inspire wellness. It has been our vision since day one to feed and bring wellness to the people of Hawaii,” said Sonia Lo, former CEO of Sensei Ag, in a press release.

“I came to Sensei Ag because the founders are of course extraordinary people, Larry Ellison and Dr. David Agus, and they really have a transformative vision for human wellness,” Lo said in a podcast. “Our goal is to grow the world’s most nutritious and, from a human wellness perspective, valuable produce, but also to create actionable data for other farmers from our growing experience.”

Sensei Farms is a billionaire’s farm and is outfitted as such. Six hyper-technological and Tesla solar-powered greenhouses sit on a sliver of what was once the U.S.’s largest pineapple plantation, owned by Dole.

After pineapple production ended in 1992, decades of soil neglect followed, leaving the red earth dry, nutrient-deficient, eroded and peppered with black plastic, once used to control the weeds. But the hydroponically grown produce doesn’t mind.

Inside the greenhouses, farms grow leafy greens and tomatoes that are cultivated hydroponically in a controlled climate. Less water is used than traditional farming, according to Sensei Ag, because water is captured and reused, with no soil necessary and almost 10 times more produce harvested per acre.

It’s all being grown with high forms of technology that includes automated rooftops that adjust to wind speed.

It is to be expected from an agricultural technology company, but perhaps less so when it’s situated on the smallest residential island of one of the most remote archipelagos on the planet.

Found in the Foodland produce aisles are Lanai mix, wasabi mix, arugula, romaine and more, beside Lanai mini tomatoes and cherry tomatoes. It’s all fresh, as it comes from a neighboring island as opposed to the more than 80% of food in Hawaii that is imported from elsewhere around the world. 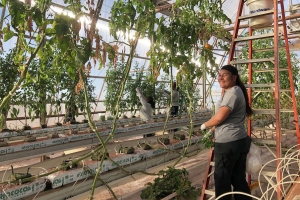 Located about 2,500 miles from the continental U.S., Hawaii is dependent on these imported food supplies, leaving the state especially vulnerable when there are natural disasters or other events that could disrupt the flow of food. The pandemic underscored the need to foster resilient local food systems, free from supply chain concerns. And the current and looming effects of climate change make the controlled environments of greenhouses a favorable option.

While some of Ellison’s other projects on the island — including a proposed affordable housing project near a county wastewater plant — have seen Lanai’s residents raise concerns, the farms provide a much-needed source of fresh vegetables.

Kathy Brindo, a long-time resident of Lanai — one of just 3,000 — noted that she and others are happy to have access to fresh produce grown on their home island. “That was rare before, unless you grew your own,” she says.

Lanai currently lacks resources such as water and fertile soil to farm prolifically. And because it is effectively privately owned by Ellison, there are no other commercial farms on the island, compared with the approximately 7,300 crop and livestock farms on Oahu, Maui, Kauai, Molokai and Hawaii Island combined. As of 2021, 1.1 million acres were operated as farmland statewide, with less than 3 acres constituting the greenhouses of Sensei Farms.

Sensei Ag calls the Lanai farm its “first,” alluding to more greenhouses in the future, both within the state and globally. Self-describing as “the present and the future of farming,” Sensei Ag has big ambitions and a big bankroll to back them.