Powered from the Earth

Masson Farms utilizes geothermal energy to fuel its greenhouses and minimize their impact on the environment.

In 1919, James Masson purchased a 15,000-square foot greenhouse in Kansas City, Missouri. For the next 66 years, Masson and his sons, R. Alexander and James, operated Masson Farms and slowly grew to a thriving three-acre facility with a focus on begonias, cyclamen, chrysanthemums and primulas.

1985 marked the beginning of a complete change for Masson Farms. That year, much like James did in Kansas City in 1919, R. Alexander purchased a small greenhouse in Las Cruces, New Mexico. Two years later, a new facility was built 20 miles away in Radium Springs, New Mexico and Masson Farms left Missouri behind.

But R. Alexander picked this location with a specific purpose in mind. Radium Springs is home to hot springs that, in the past, were used for settlement by Apache Native American tribes and by colonizing Spanish soldiers and settlers for rejuvenating baths, according to a history paper on the springs published by the Oregon Technical Institute. Now, under the name Masson Farms of New Mexico, the entire operation is powered using geothermal energy. The fossil fuels were left behind in Kansas City.

R. Alexander had been interested in renewable energy even prior to his business’ move to New Mexico. The move to Radium Springs offered him a chance to build his company around it.

Today, they grow the same plants the company was built around back in 1919, but have added mums, calla lilies and various other plants. According to their website, Masson Farms is the second largest greenhouse powered by geothermal energy in the United States.

“The biggest advantages that we see going forward with geothermal is that we, being in the greenbusiness, are even ‘more green’ in the fact that we’re not using fossil fuel,” R. Alexander said in a quote from Masson Farms’ website. “We’re running an operation that is clean in relationship to the environment, to the workplace, and in the product that we produce. It brings clean enjoyment and it is everything to me.”

The science of geothermal energy 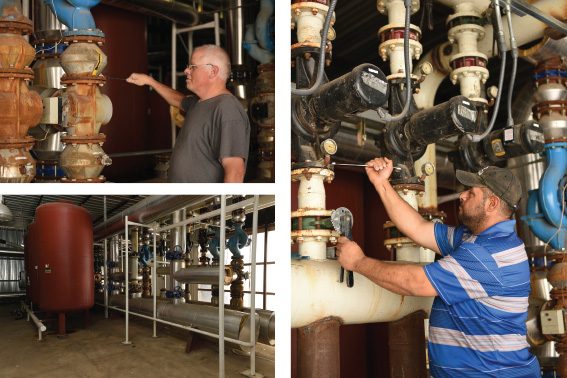 Geothermal energy can be accessed in two different ways. On a large scale, geothermal power plants use heat from deep within the Earth to make steam to create electricity. Masson Farms uses geothermal energy pumps. The pumps do not go as deep into the ground as power plants and instead tap into heat close to the surface. First, water from the springs is moved through a series of pipes. Then, the water heats up as it travels through the loop located underground and then into a heat exchanger room. Once the water is back above ground, the energy created is used to fuel the greenhouse. The process can also be reversed for cooling.

Additionally, Masson Farms’ system has direct access to the energy source — something only possible near naturally occurring geological processes like Radium Springs’ hot springs. Without the easy access to the springs, it would be next to impossible for Masson Farms to have built a functional, thriving greenhouse operation there, says Andrews.

The springs continue to renew themselves. I don’t see our ability to use geothermal energy ever going away. — Jacob Vasquez, Masson Farms’ Maintenance Manager

Masson Farms has two well locations that tap into the springs — one that is 180 feet deep and another that is 110 feet deep, according to maintenance manager Jacob Vasquez. This is slightly deeper than normal wells and allows Masson Farms to tap into a naturally warmer source of water. Additionally, the water gets reused over and over again; once it exits the greenhouse, it goes back into the ground and will eventually come back through the system.

“It’s similar to having a natural well at your house or on farm. It’s the same pump and motor system,” Vasquez says. “The material we use is a little different because the geothermal water will corrode the pipes because of the minerals in it.” Combined, the wells power 24 acres of greenhouse growing space divided up into two-acre blocks.

There are costs involved with relying solely on geothermal energy. Digging and maintaining the wells can be expensive, as can buying some of the custom materials to adapt the greenhouses. Any repairs or upgrades may be more expensive for the same reasons.

But unlike natural gas or other fossil fuels that could rise based on the health of the market, availability and other factors, geothermal energy comes at a cost that isn’t the same year to year, but doesn’t fluctuate the way natural gas does.

“The natural gas costs go up and down,” Vasquez says. “Our geothermal costs average out. It’s more of a fixed cost. I don’t know that we always save a lot of money, but it helps.”

Masson Farms also doesn’t expect the springs to dry up or become unusable. The springs, and the energy they provide, are something they plan to rely on for a long time. As far as 60 miles north of Masson Farms, in a town called Truth or Consequences, there are similar hot springs that have been there for thousands of years and help define the local culture. A local high school is even named Hot Springs.

“[The springs] continue to renew themselves,” Vasquez says. “I don’t see our ability to use geothermal energy ever going away.”

The power of New Mexico 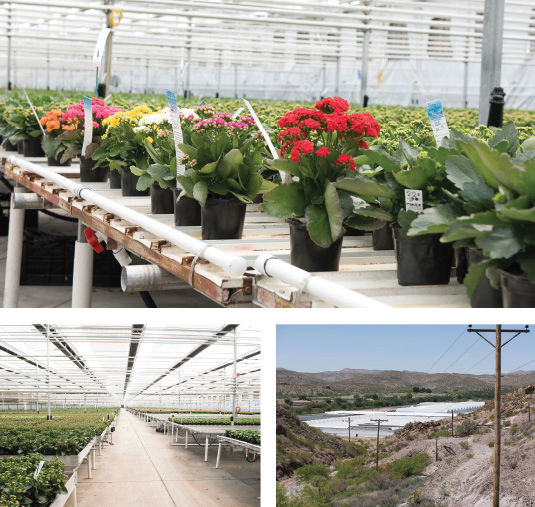 Aside from the importance of the hot springs, New Mexico — and, more specifically, the area near Las Cruces — is dependent on agriculture and many of the workers in the area have been working in fields and greenhouses for generations.

“The labor force is generations of agricultural workers,” Vasquez says. “We are the green chile capital of the world down here, the pecan capital of the world and they also work in greenhouses.” During peak season, Masson Farms will have 80 to 90 seasonal employees working at any given time.

Most, if not all, of the workers — and all of Masson Farms’ full-time staff — make the 22-minute drive from Las Cruces to Radium Springs daily. As of 2015, Las Cruces has an estimated population of 101,643.

Masson Farms’ business model is to wholesale products to retailers in the states closest to them. That includes large grocery story chains such as Safeway, Kroger and Costco. They also sell directly to independent garden centers and smaller retail chains in the region.

“Ultimately, the goal is to ship as close as possible,” production manager Doug Andrews says. “Arizona, Colorado, Texas and New Mexico are our focus.”

New Mexico also happens to be an ideal climate for growing, as it’s warm for most of the year and almost always sunny. Andrews says New Mexico has “the best sun in the U.S.” because it’s sunny at least 327 days per year in Radium Springs. Again, the environment provides a built-in advantage.

“We can grow mums in January when almost everyone else is struggling,” Vasquez says, “because we have high light even in January.”

A commitment to clean

Unlike some of the tax breaks growers utilizing solar panels or wind energy can receive, there are no federal or New Mexico state tax breaks for growers like Masson utilizing geothermal energy currently. Currently, the only government incentive available is New Mexico’s geothermal ground-couple heat pump tax credit, which will cover up to 30 percent of the cost to install a geothermal-coupled heat pump system according to a description of the program on New Mexico State University’s website. Masson Farms has not utilized said program.

“That’d be great if there was [a tax incentive],” Andrews says. “But if you go into a geothermal situation for the savings, I think you’re being a little bit naïve about the technology. What the technology provides for all of us is a benefit in being a part of something green, something environmentally friendly.”

Andrews notes that Masson Farms probably could utilize solar and/or wind energy if it wanted. But the cost of installing technology would be high, it wasn’t around when the greenhouses were originally built in 1987, and he believes that the geothermal energy is more reliable.

To better understand geothermal technology and how it is best used, Masson Farms has a long-standing partnership with New Mexico State University. In addition to have researchers study solar and wind energy, New Mexico State has two researchers — Harold Trujillo and Daren Zigich — who work specifically with geothermal energy and work as liaisons to the U.S. Department of Energy to “promote environmental and economic sustainability for New Mexico and its citizens,” according to the program’s website. And like the local workforce, New Mexico State is based in Las Cruces.

Additionally, students from the New Mexico Technical Institute are working with Masson Farms to build a reverse osmosis machine. If successful, the machine would clean the geothermal water and remove harmful minerals from it, ideally allowing Masson Farms to use the clean water for irrigation and cooling pads. In keeping with the business’ other eco-friendly practices, the machine would also be powered by geothermal energy.

“They are coming out this summer to build one,” Vasquez says. “It will be the first one built in this part of the country.”

“There aren’t a lot of places that do this,” Andrews says. As a result, maintaining and improving the facilities can be difficult and much of the work is customized for the greenhouse. At times, it can be difficult to find comparable examples of what works for geothermal energy and what doesn’t.

But it’s something Masson Farms committed to in 1987 when R. Alexander moved his business away from Kansas City and to Radium Springs. And that commitment has never wavered.

“Our owner had a lot of foresight and he was green before green was in,” Vasquez says. “We like to say we are in the happiness business — everything we do is good — and geothermal energy is part of that.”