Your options for greenhouse ventilation and why it’s important.

Ventilation is the process of exchanging indoor air with outside air. In a conventional greenhouse, ventilation is often used as the first stage of cooling, followed by evaporative cooling and shading. There are several benefits of ventilating the greenhouse, including the removal of heat, moisture and oxygen; providing a fresh source of carbon dioxide (CO2) for plants; moving air across the crop canopy; and doing all this with relatively little energy consumption.

Greenhouse ventilation can be accomplished by simply opening vents in the structure (natural ventilation, NV) or by operating high-volume fans (mechanical ventilation, MV). Most commercial greenhouses are equipped with the ability to do both NV and MV, whereas some are only able to do one or the other. It is generally better to have both NV and MV available, so that adjustments can be made in response to changes in the crop and the climate. 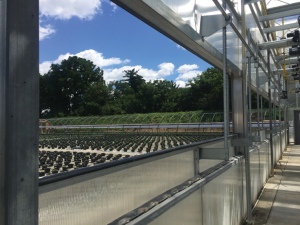 As it implies, NV relies on the forces of nature to do most of the work in exchanging indoor air with outdoor air. These forces include wind and buoyancy. Because NV depends on natural forces, the quantity of air exchange and direction of airflow can be unpredictable. However, it is also the most energy-efficient option for managing the greenhouse climate.

Wind is an “external force” that literally pushes air into the greenhouse through openings in the cover. The positive pressure created inside the greenhouse will push the interior air out. Because wind-driven NV is most effective when it is “windy,” when planning the site, it is important to consider both the orientation of the greenhouse and the locations of the vent openings to take advantage of predominant wind directions for a given location. Additionally, academic studies (including “Effects of Buoyancy and Wind Direction on Airflow and Temperature Distribution in a Naturally Ventilated, Single-Span Greenhouse Using a Wind Tunnel,” a paper for the American Society of Agricultural Engineers, which I co-authored, and “Comparison of Finite Element and Finite Volume Methods for Simulation of Natural Ventilation in Greenhouses) have demonstrated that NV is improved when the greenhouse has multiple vent locations, which allow air to enter at one location and leave from another. Examples include openings in both the sidewalls and the roof, and openings on opposite sides of an A-frame gable roof.

The other type of NV is produced through buoyancy, or the “chimney effect.” Buoyancy is achieved when hot air generated by solar radiation rises above the plant canopy and into the ridge space. If vents are opened inside the roof, the hot air will escape to the outside, as long as outside air can re-enter the greenhouse from another vent location. If there are no vents in the roof, this hot air will be trapped in the ridge space with nowhere to go. NV via buoyancy is limited in a greenhouse that is filled with plants that are actively transpiring and evaporatively cooling themselves. It is also limited to when the outside air is hotter than the inside air because heat likes to move from areas of higher temperature to areas of lower temperature. Therefore, NV by buoyancy is really most effective in cold weather, when the outside is cooler than the inside. 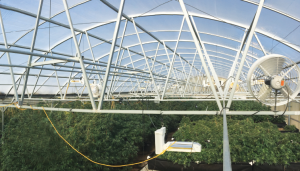 Mechanical ventilation uses fans to exchange air with the outside. These fans are typically sized based on maximum cooling requirements and minimum ventilation requirements (for CO2 replenishment and/or moisture removal). Unlike NV, fans used for MV provide predictable quantities of air exchange and consistent directions of air flow. Fans can either push air into the greenhouse via positive displacement, or they can pull air out of the greenhouse via negative displacement.

Positive displacement MV is most commonly achieved when a fan at one end of the greenhouse pushes outside air through an overhead plastic duct running down the center of the greenhouse. This duct has holes punched on either side to blow air (somewhat) evenly over the tops of the plants. This method of MV was most popular in the ’60s and ’70s and in northern climates, where the duct would be connected to a furnace that heated the incoming outside air. This method of MV has mostly fallen out of favor for several reasons, including shadows cast on the plants by the overhead duct; poor distribution of heated air; higher energy costs for fan operation; and poor quality of the duct material that required regular replacement or maintenance.

Recently, there has been a resurgence of positive displacement MV, with the ducts mounted below benches and the implementation of recirculating air-conditioning systems in sealed, or closed, greenhouses.

When positive displacement MV relies on introducing outside air to condition the greenhouse without recirculation back to an air conditioner or climate control chamber, it is important to consider how the air will leave the greenhouse. If relief vents or other openings in the structure are not provided, the greenhouse may become overpressurized, which can cause the structure to bow outward, doors to swing wildly open or stay stubbornly shut, and ultimately reduce the grower’s ability to control the environment.

Negative displacement is the more traditional method of MV used in greenhouses. This method uses large-volume axial fans located on the wall at one end of the greenhouse to pull air outside through vents at the opposite end. These exhaust fans have many benefits, including the ability to be used with an evaporative cooling pad; control over the volume of air exchanged based on need; and relatively low energy use compared to positive displacement fans and air conditioning.

When direct drive fans (those with fan blades connected to an axle and turned at the speed of the motor) are used, rather than belt-driven fans (where one motor drives a belt stretched between fans), the fan speed can be adjusted incrementally based on need and will also respond to changes in pressure upstream caused by failed louver openings, dirty screens and evaporative cooling pads, or other restrictions to airflow. Therefore, energy will be saved by not running the fans at full speed all the time, and motors will have a longer life due to less cycling and less overloading.

One of the biggest advantages to growing cannabis in a greenhouse is using climate management strategies and technologies that use much less energy than growing indoors.

The Benefits of Greenhouse Ventilation

Greenhouse ventilation serves many purposes, including:

2. Removing water vapor generated by plants during the day and night

4. Providing the source of air for evaporative cooling