“As a Dutch-American, I like to combine idealism and capitalism”

A sea of glass. That is what the young son of a horticulturist, Peter Stuyt, used to see from his bedroom window on Vlietweg in the Dutch town of Naaldwijk. At the age of 22, he left for California. There he was met with an ocean of a different kind – the Pacific Ocean. Peter found himself in the glasshouse cultivation hub of Carpinteria. But, the size of this glasshouse area was nothing compared to that of Westland in the Netherlands.

“The ocean is never far away.”

Peter’s father was one of the first gerbera growers in the Netherlands. He had a greenhouse of 11,000m2. For that time, this was a sizeable business. But Peter did not want to follow in his father’s footsteps. He longed for more freedom.

“As a farmer, you are bound to your business 24/7. You have to be OK with that. I opted to go and work for the greenhouse builder Smiemans. First in the Netherlands, and later in France and Italy. There, for 18 months, I learned the craft. After that, the work dried up in the Netherlands. I went looking for something new. I had no desire to work in the Northern European rut. So, I went to California,” Peter says. 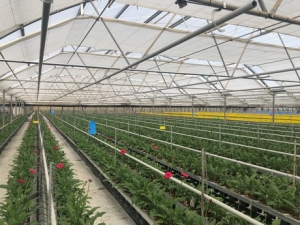 There, he joined old neighbors, and friends, of his parents. “I lived in a caravan with no running water for the first year. I got my electricity via an extension cord. It had the most beautiful view of the ocean.” In the beginning, Peter kept himself busy with greenhouse maintenance. There were many wooden structures covered in fiberglass. This fiberglass had to be replaced every ten years or so. “The second generation of immigrants started building greenhouses. Then, my experience, of course, came in handy.”

Peter remembers when Dutch people sometimes came to visit. “After a cup of coffee, we, of course, took a walk through the greenhouses. More than once we heard them saying what a mess things were. They often asked how we could work in greenhouses such as these. We laugh about this. Dutch horticulturalists were drowning in debt. They were only too happy to be able to leave their businesses to the next generation. Here, good money is being made. Businesses are being paid off.” Growers in California, however, have had their fair share of economic difficulties over the years. 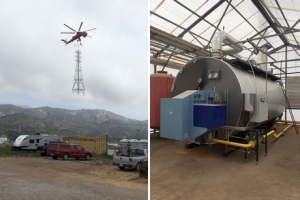 “The Andean Trade Preference Act was signed in 1991. This opened the border to free imports from South America. This action almost sank the flower industry in the US. Production figures in South America could not compare to those in California. But, labor costs were much lower. The lower land prices there also meant people were looking at buying more than just a hectare or two.”

The rose industry in California was hit the hardest. Case in point – 98% of the roses on the American market are imported now. Nevertheless, this did not spell the end for glasshouse horticulture in the United States. The most difficult cultivars, such as gerbera and lilies, survived. “These have been successful for years. At one point, gerberas from Carpinteria were good for half the supply of these flowers,” Peter remembers.

Let’s take a leap in time to 2007/2008. These were challenging years in their own right. Horticulturalists had a hard time making ends meet. The reason this time? The US/Canadian exchange rate. “Production costs for Canadian growers were relatively low. This, while prices remained at an excellent level. After all, for a wholesaler in New York, it did not matter whether the flowers came from Canada or California. The recession made it very tough for growers in California. They were barely keeping afloat.”

Growing vegetables in greenhouses became more popular. “Before, you could only find Roma tomatoes and iceberg lettuce in the supermarket,” Peter remarks. “Now, the average US supermarket’s fresh produce aisle is on par with those in Dutch supermarkets. Modern greenhouse construction has contributed to this to a certain extent. Floriculture remains somewhat in the realm of the small business. In contrast, cultivating vegetables under glass is growing by leaps and bounds. All at once, 50 acre – about 20 hectare – businesses are springing up all over.” 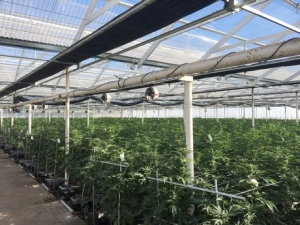 In the past four years, things have been looking up for horticulture in California. This is mostly thanks to the expansion of cannabis legalization in 2016. “It is amazing to see the impact this has had. All of Carpinteria has benefitted from this. There are good opportunities for growing lettuce under glass. Potted orchids are helping too. The remaining cut flower growers have also had a slight upturn.”

You can still see the history of glass horticulture in the region. “You still find the wooden greenhouses from the 60s here and there. In Michigan, they switched to steel sooner due to the weather conditions there,” Stuyt explains. “But, in California, you could get away with wooden greenhouses for longer. We have refurbished many of these in the last three years. They are now suitable for cannabis cultivation.”

A blackout screen, heating, and ventilation in a cannabis greenhouse in Carpinteria, California. 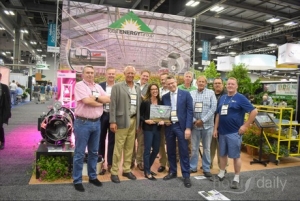 In 1986, Peter set up Horticultural Labour Services with Bert Neeft. Looking back, Peter says, “It is incredible to consider what we have experienced over the last 33 years. We started with just a hammer and a few nails. When we applied for our license, we were classified as a landscaping company. So, a little gardening business. They did not know what greenhouse construction was. Soon we started supplying screens as the energy crisis had affected us too. If you wanted to grow your business, you had to leave the state. So, since 1997, under the name, Total Energy Group, we have been supplying not only screens, we also supply heating and ventilation systems, LED lighting, and climate control computers throughout the country.”

Every year, Total Energy Group has a stand at Cultivate in Ohio.

Peter admits that years ago, he would not have foreseen the enormous growth in the scale of the horticultural sector. “I did not anticipate the far-reaching mechanization of our sector. You see this, with ever-larger machines, in agriculture. Such large machines will not fit in the greenhouse, I reckoned. I thought growers would always be more important than machines. Now it is no longer strange to see 100-hectare companies in the US too.”

Horticulture is the Future

In the United States, there is no end in sight for developments in the horticultural sector, thinks Peter. “Also not worldwide. Climate change, water scarcity, labor shortages, urbanization – concentrated agriculture is the answer to all these problems. And this is only possible in the modern greenhouse. You can place these structures in the craziest places.”

“You can use raw materials very efficiently. Not to mention the mechanization and automation possibilities. It makes me proud that we, as the horticultural sector, can offer solutions for the issues the world is facing. I sometimes wonder if we acknowledge that enough. Of course, there is money to be made in this sector. But as a Dutch-American, I like to combine idealism with capitalism,” Peter concludes.